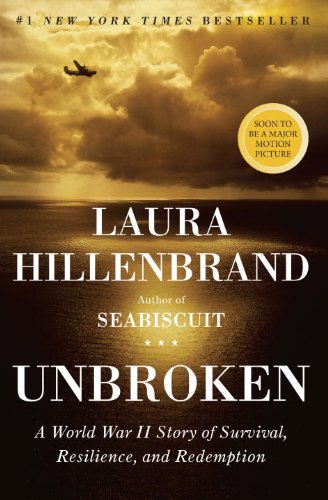 In Portland I went to watch the movie “Dawn of the Planet of the Apes” with my cousin and saw the trailer of “Unbroken”. I was intrigued by the trailer and My cousin recommended the book to me, said it was a bestseller and pretty fun to read. I bought it right after.

It took me a few weeks to read the book, mostly on subway. From the movie trailer I thought this book would be full of cruel tortures done by Japanese, which can be quite out of imagination and usually attract readers. But actually there is much more than that. The book is a biography of Louie Zamperini, from his childhood to his short but shining athlete career, then his legendaries in the army and as a POW. The days he drifted in the ocean were like a “Life of Pi” story but more real. And there is indeed a large part of the book dedicated to his POW experience. There is even a pretty large part at the end to cover Louie’s post-war life.

I like the book a lot. It’s a truly amazing story that drives readers asking what is going to happen next. A better part of credits should go to Louie. His real life story makes most fictions look mundane. The author also did a great job of collecting story pieces and weaving them together wonderfully.

Believe it or not, the sadistic anecdotes in Japanese POW camps somehow resonate with my middle school life. The book said in a POW camp “he wasn’t permitted to speak, whistle, sing, tap, read or look out his window”, and there are camp guards inspecting outside and look inside windows, who may jump through windows and catch someone. The rules and the scenario are almost exactly the same as the evening self-study sessions in my middle school. Also the POWs were forced to kill flies and have a “competition”, that also happened in my middle school..

I read the book on Kindle and it made me realize one shortcoming of Kindle e-book compared to paper book: it’s not as convenient to flip to the later part of a book and take a peek. When I read Louie was freed from Japanese, Kindle showed it as 60% of the book. So I kept wondering what the hell was the remaining 40% about… But it would take quite a few clicks and flips to find it out quickly on Kindle, so I chose to hold my curiosity and keep reading page by page, until I found the book actually ended when the progress showed 70%! The last 30% is acknowledgement, references and a preview of the author’s other book…